Walpole tended to treat philanthropy flippantly, often with an element of performance to amuse his friends. Despite this, he was active in his support for good causes. Walpole was drawn to outlandish cases such as Theodore von Neuhoff, exiled King of Corsica (1694–1756), and Louisa, “Maid of the Haystack” (died 1800), and he presented himself as a philanthropic Don Quixote tilting at windmills. Walpole had his fingers burned badly when he rebuffed a request for patronage from the poet Thomas Chatterton (1752–1770), who before his premature death vilified Walpole for his lack of charity. Walpole’s philanthropy seems to have been motivated by a desire to cultivate the curious and romantic in life, as well as help people in need. Behind the scenes he seems to have been a regular anonymous almsgiver, anxious only to preserve records of the most striking philanthropic cases. 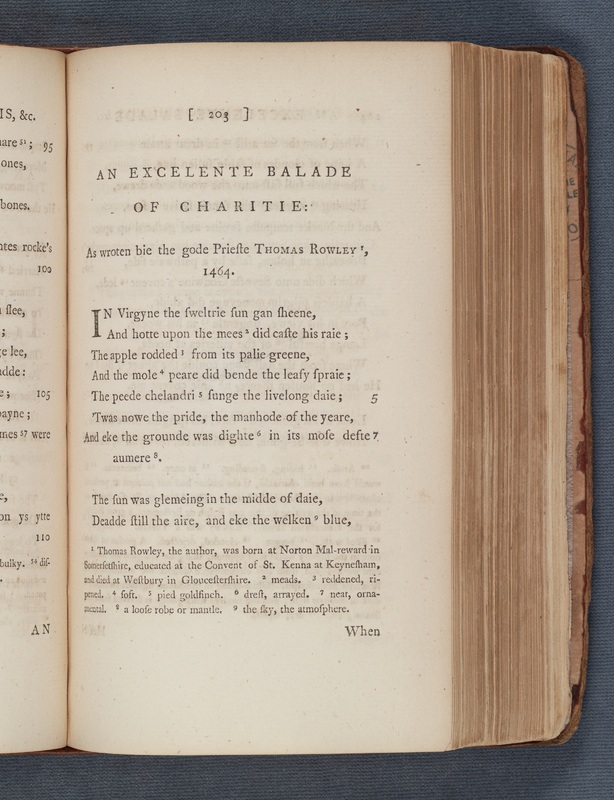 This is Walpole’s copy of Chatterton’s “Excelente Balade of Charitie” (composed 1769), which purports to be the work of Rowley, a fifteenth-century Bristolian monk. It is a medieval retelling of the parable of the Good Samaritan in which a poor pilgrim begs alms of the Abbot of St Godwin’s priory and is rudely dismissed. Chatterton’s notes reveal the poem to be a satirical allusion to Walpole’s rejection of his appeal for patronage, although whether or not Walpole recognized the hidden message is unclear. 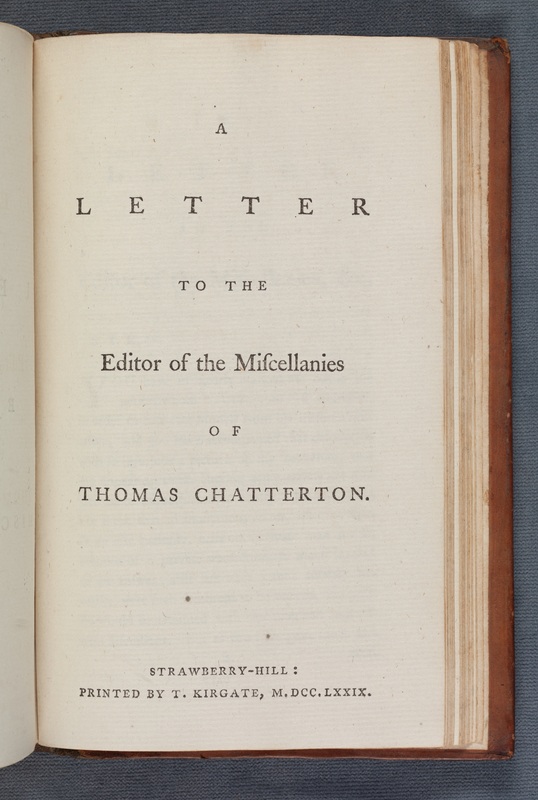 Horace Walpole
A Letter to the Editor of Miscellanies of Thomas Chatterton
Strawberry Hill: Printed by T. Kirgate, 1779
49 1609 v.39

In his preface to Chatterton’s posthumous Miscellanies in Prose and Verse (1778), the editor John Broughton accused Walpole of treating the young Chatterton “with neglect and contempt” and in effect driving him to commit suicide. Badly stung, Walpole issued his Letter to the Editor of Miscellanies of Thomas Chatterton (1779), in which he defended his decision to refuse Chatterton on the grounds that the Rowley papers were forgeries. Walpole was at pains to disavow pretensions to act the part of Maecenas (patron of Horace and Virgil) “to every muse-struck lad who is bound to an attorney.” 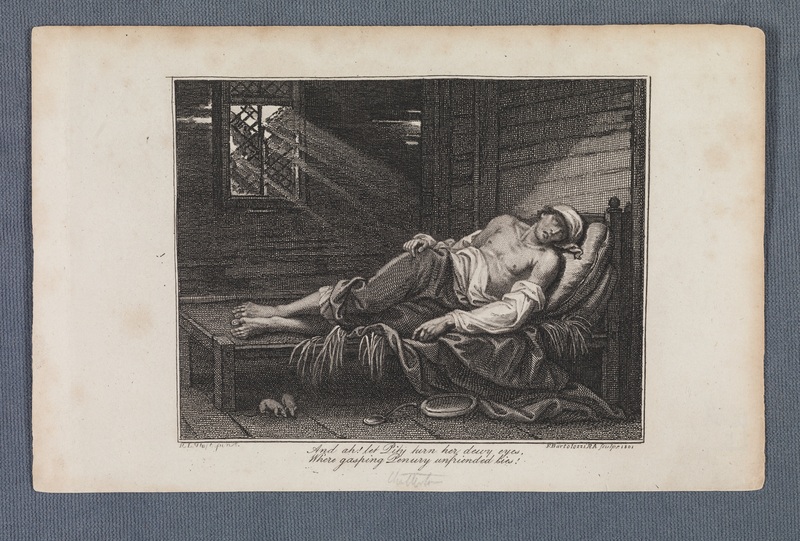 This image portrays Thomas Chatterton as victim of Walpole’s parsimony. In West’s image, the impoverished young poet lies alone and unclothed in a London garret, with an empty bowl and rats on the floor beneath him. Chatterton wrote to Walpole in 1769 to ask for his patronage, enclosing what Chatterton claimed were fragments of medieval literature. Walpole rejected them on the grounds they were forgeries. Chatterton died in 1770, prompting claims that Walpole’s refusal to act charitably contributed to Chatterton’s death. 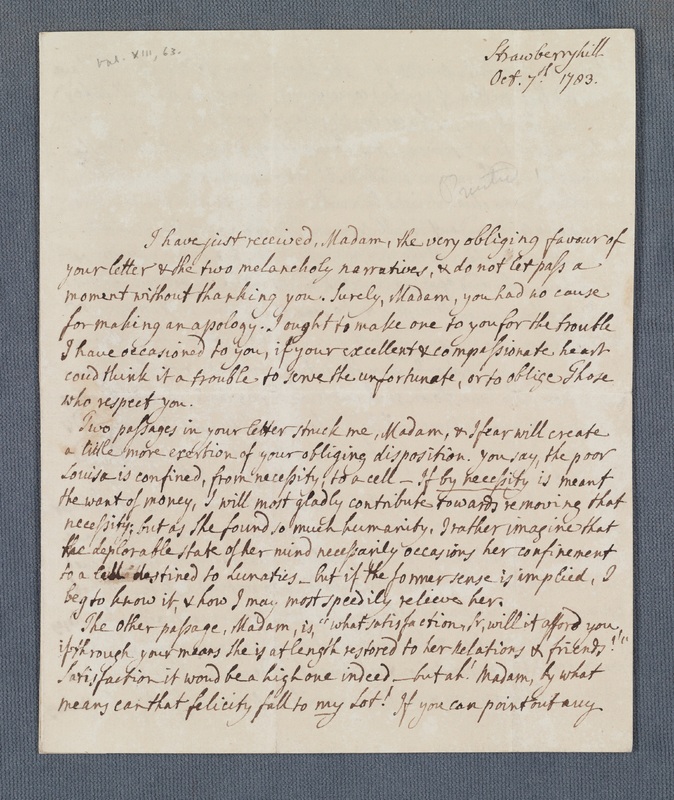 In 1783, Mary Hamilton, Governess to the Royal Family, drew Walpole's attention to the case of Louisa, a mentally ill woman discovered living rough beneath a haystack outside Bristol. Louisa believed she was the illegitimate daughter of the Holy Roman Emperor Francis I. In his reply to Hamilton dated October 7, 1783, Walpole offered to trace Louisa’s relatives in Germany and pay for medical treatment. With characteristic whimsicality, he commented that “if ever is justifiable to good sense to act romantically, it is by being the knights errant of the distressed.” Louisa died in Guy’s Hospital for Incurables in 1800. 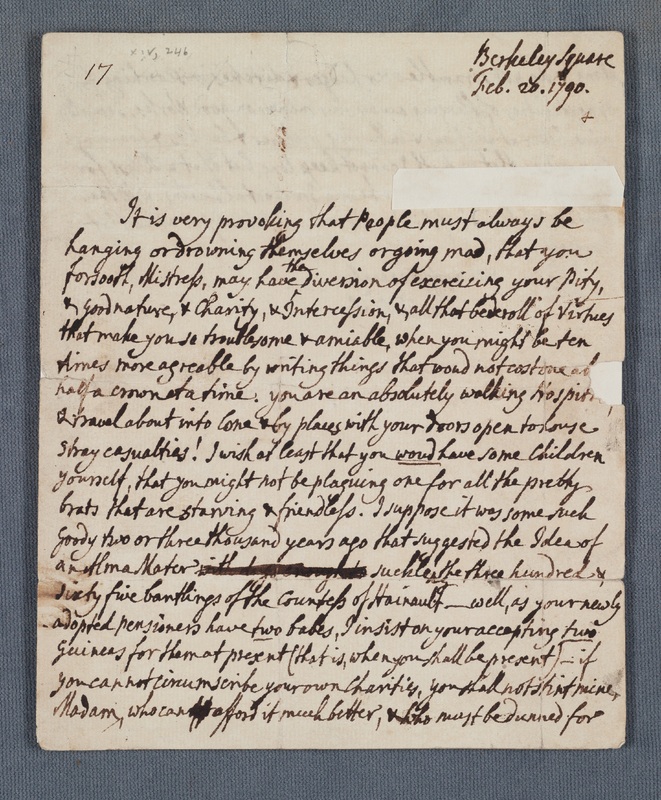 In this mockingly peevish letter to his friend the social reformer Hannah More, Walpole promises to give two guineas for the children of a poor family More has taken into her care. Walpole teases More for her “pity, and good nature, and charity, and intercession, and all that bead-roll of virtues that make you so troublesome and amiable…You are an absolutely walking hospit[al]…” Walpole seems to have embraced the persona of a curmudgeonly bachelor forever plagued by do-gooders seeking charity donations. In the final line, he has changed “I cannot’ to ‘I can afford it much better.” 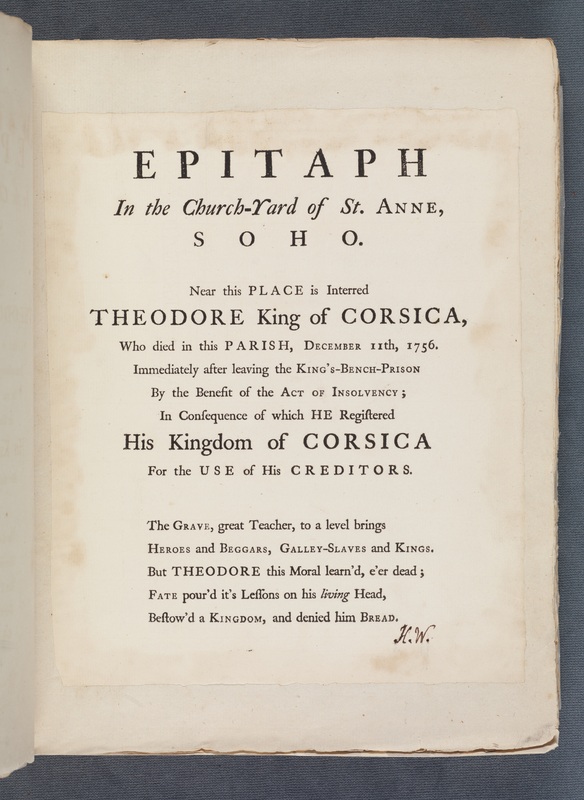 Theodore von Neuhoff (1694–1756) was a German adventurer who was crowned King of Corsica during that island’s struggle with Genoa. Theodore was ousted, pursued across Europe, and finally arrested in London for debt. Walpole launched a subscription fund for him and proposed a benefit play (Lear, the fitting story of an archetypal tragic monarch), but only raised £50. After Theodore’s death, Walpole composed an epitaph for him, which was engraved on a memorial plaque and remains in the churchyard of St. Anne’s church, Soho, to this day. 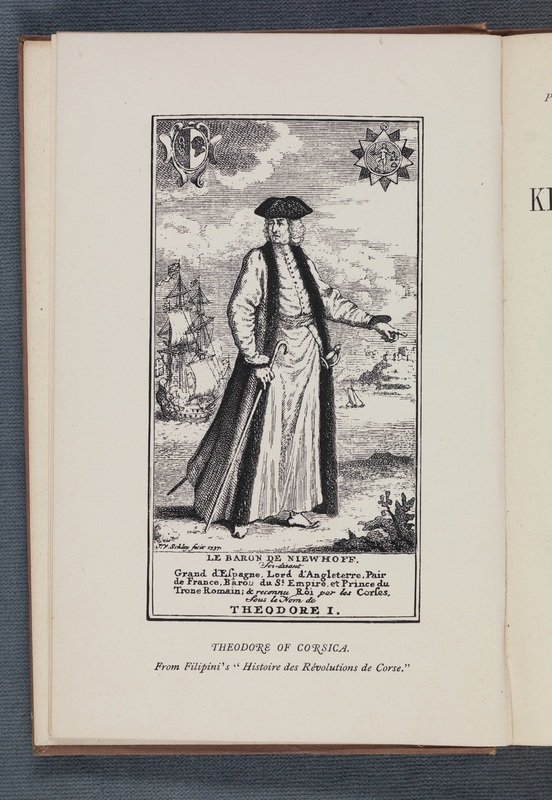 The frontispiece to Percy Fitzgerald’s 1890 biography shows King Theodore at the zenith of his majestic pomp. Fitzgerald was sympathetic toward Theodore and criticized the “ungentlemanly irony” (p. 143) of Walpole’s publicity article in The World. The biography quotes Theodore’s son Frederick’s Memoirs of Corsica (London, 1768; published simultaneously in French as Memoirs pour servir à l’histoire de Corse), who complained of benefactors making “barbarous sport” of Theodore “by insulting his fortunes, and accompanying their benefits with abusive jest,” probably a reference to the proposed benefit play. 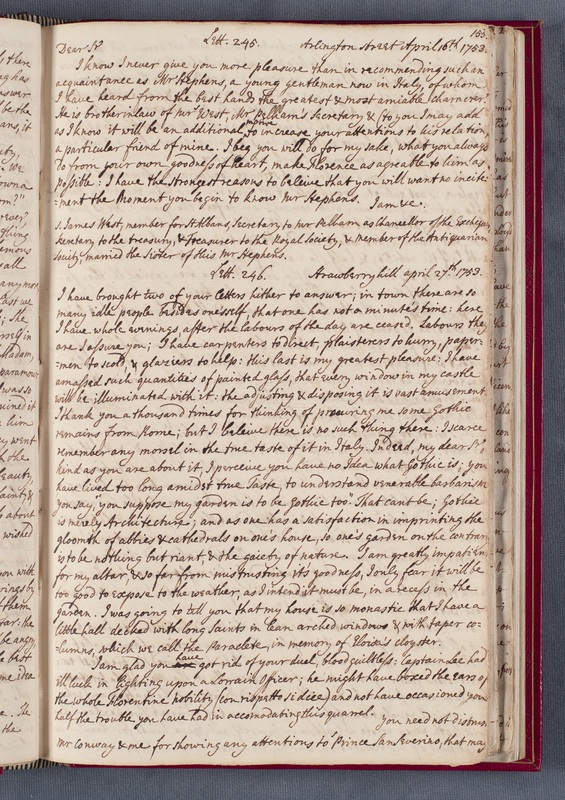 In this peevish letter about the subscription fund for Theodore, Walpole complains to Horace Mann that “His Majesty’s character is so bad, that it only raised fifty pounds; and though that was so much above his desert; it was so much below his expectation, that he sent a solicitor to threaten the printer with a prosecution for having taken so much liberty with his name—take notice too, that he had accepted the money! […] but I have done with countenancing kings!” Walpole fell out with Theodore and blamed the fallen king for his own improvidence. 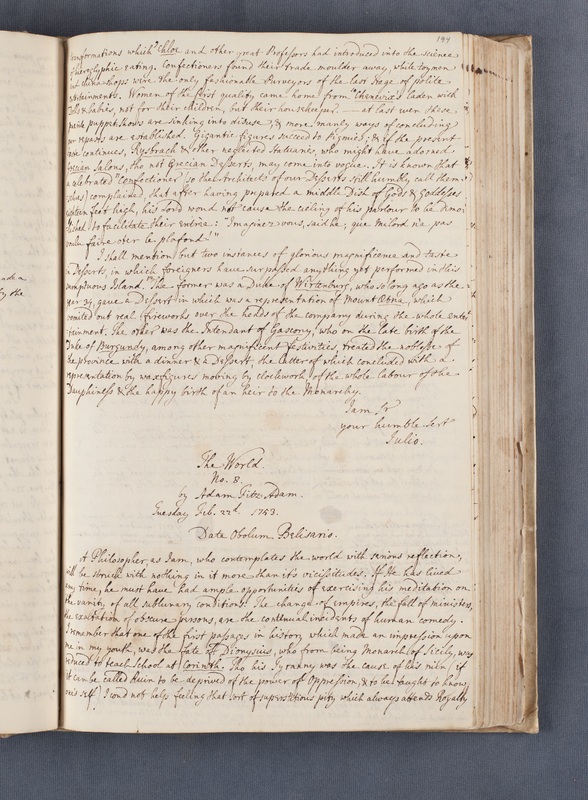 The World, written to draw attention to Theodore’s financial plight. As was Walpole’s habit, a running commentary on the pasted newspaper clipping appears on the verso. Walpole compares Theodore to fallen monarchs Edward II, Richard II, and Charles II, with the difference in his favor that he was elected by the people of Corsica. Walpole expresses concern “that the partisans of indefeasible hereditary right will withhold their contributions” from his fundraising effort, which only raised £50