The Magdalen Charity, opened in 1758 and another brainchild of Jonas Hanway, took in penitent sex workers in order to rehabilitate them into respectable working life. Walpole’s account of his visit to the charity on January 27, 1760, is the sole surviving description of the Magdalen’s original chapel at Goodman’s Fields, near the Tower of London, a Gothic design that may have inspired elements of Strawberry Hill. Walpole formed part of Prince Edward’s entourage, probably as a guest of his cousin Lord Hertford, the Magdalen’s founding president. Walpole mocked what he saw as the sexual hypocrisy of the occasion, where the high-society congregation wept over the melodramatic sermon on the perils of seduction preached by William Dodd (1729–1777), the “macaroni parson” later hanged for forgery. From the available evidence, Walpole preferred to give privately rather than take part in philanthropic spectacles, although he no doubt liked to be invited. 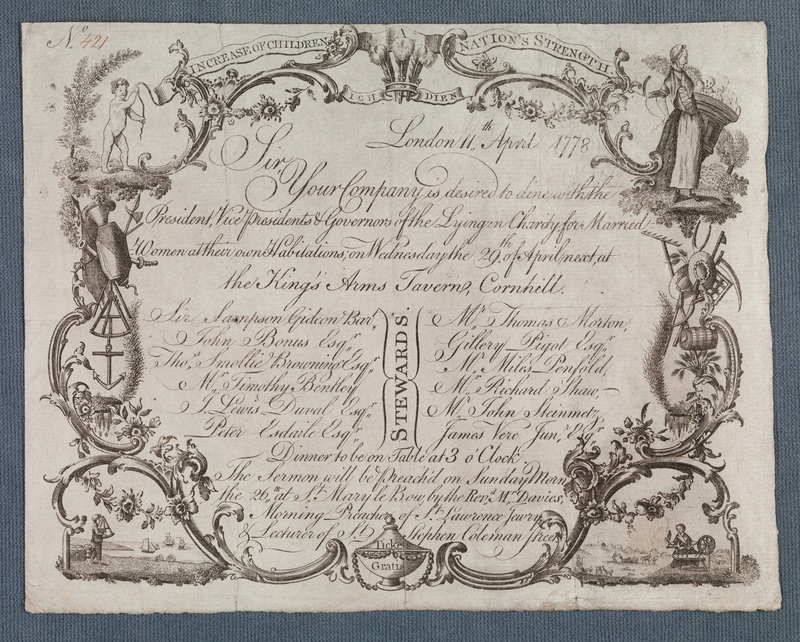 With the growth in the eighteenth century of the public sphere and the taste for sociability came the concept of the charity ball and the charity dinner, gala occasions where supporters of philanthropic organizations could mingle and, most crucially, donate. This invitation from 1778 was issued by the governors of the Lying-In Charity for Married Women at their own Habitations, founded in 1757 to provide midwifery and medical services to poor mothers. The decorative border illustrates occupations that poor children were expected to follow. 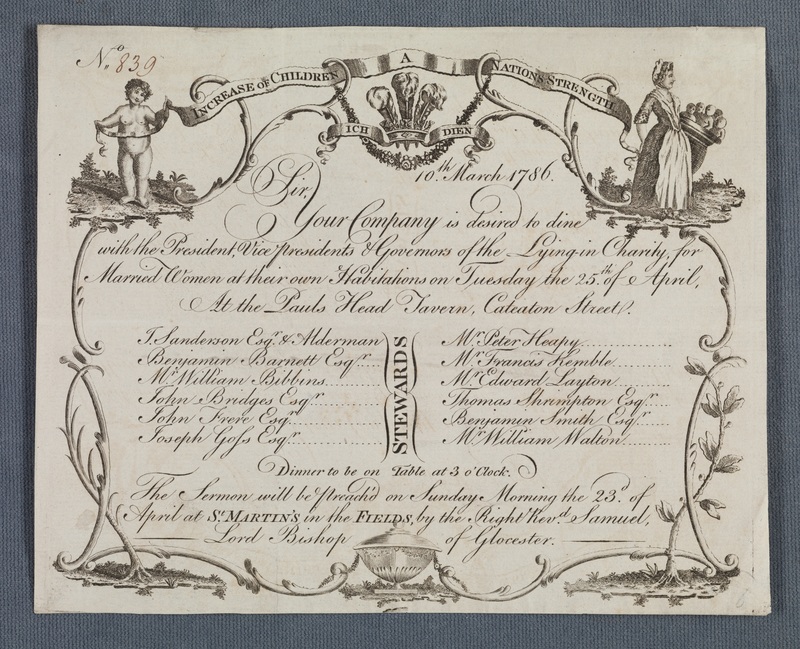 This invitation is for the Lying-In Charity’s gala dinner on April 25, 1786, held at the Paul’s Head Tavern, Cateaton Street. It was common for sermons to be preached on such occasions. The 1786 Lying-In Charity sermon took place on April 23 in the church of St. Martin-in-the-Fields, with the Bishop of Gloucester, Samuel Hallifax, as preacher. The Lying-In Hospital was one of many organizations designed to reduce the infant mortality rate and the number of deaths in childbirth, part of a conscious effort to boost the population. 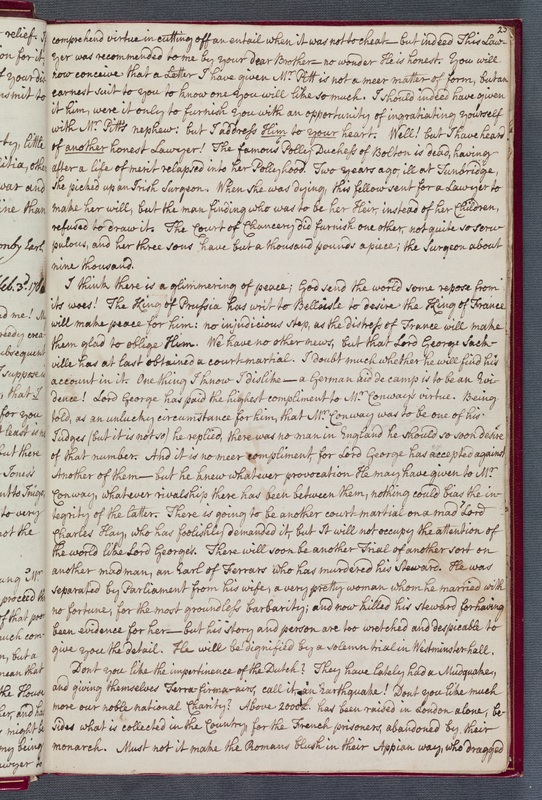 Don’t you like the impertinence of the Dutch? They have lately had a mudquake, and giving themselves terra-firma-airs, call it an earthquake! Don’t you like much more our noble national charity? Above £2,000 has been raised in London alone, besides what is collected in the country, for the French prisoners, abandoned by their monarch. Must not it make the Romans blush in their Appian Way, who dragged their prisoners in triumph? 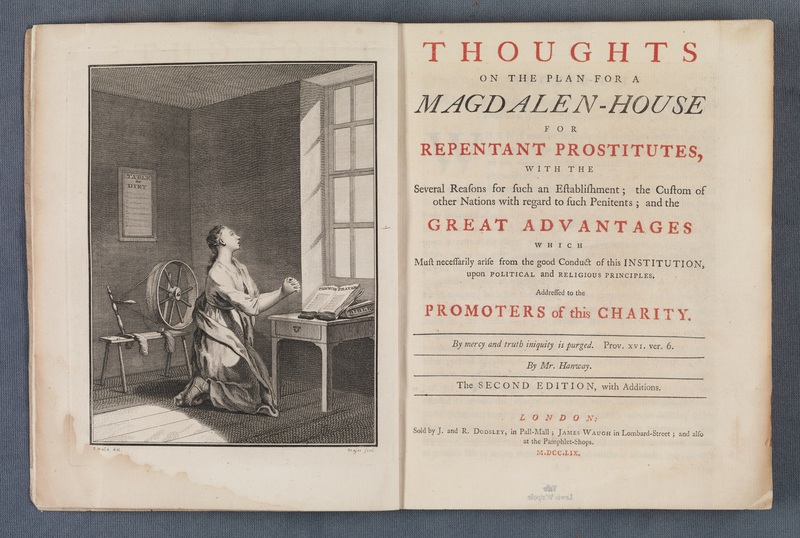 Jonas Hanway
Thoughts on the Plan for a Magdalen-House for Repentant Prostitutes
London: J. and R. Dodsley and James Waugh, 1759 (2nd edition)
63 759 H19

Hanway’s prospectus for the Magdalen Charity, first published in 1758, declared that “If you can convert bad women into good ones, it will be a work worthy the applause of Angels.” The Magdalen’s founders were relatively sympathetic to women who, in many cases, were blameless victims of male seduction. Walpole commented on his visit: “a few were handsome, many who seemed to have no title to their profession, and two or three of twelve years old: but all recovered, and looking healthy” (HW to George Montagu, January 28, 1760, HWC 9:273). 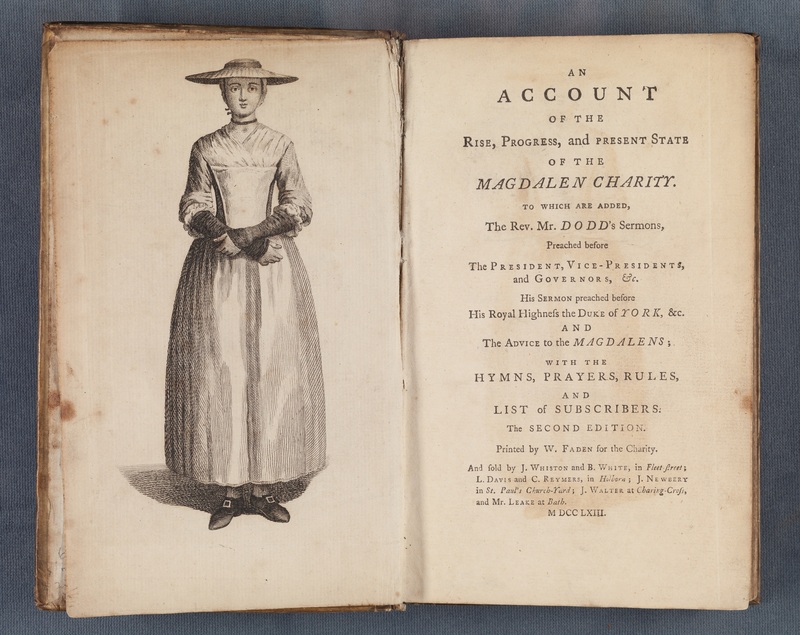 Frontispiece
William Dodd
An Account of the Rise, Progress, and Present State of the Magdalen Charity
London: Printed by W. Faden, 1763
646 763 D66

Dodd’s account of the Magdalen Charity, published in 1763, includes an image of the plain outfits worn by the inmates, described by Walpole three years earlier as “all in greyish brown stuffs, broad handkerchiefs, and flat straw hats with a blue ribband, pulled quite over their faces” (HW to George Montagu, January 28, 1760, HWC 9:273). This volume contains the sermon Dodd preached before Prince Edward during Walpole’s visit, as well as the Magdalen’s rules and a list of donors. Dodd is at pains to emphasize the orderly, Christian nature of the charity. 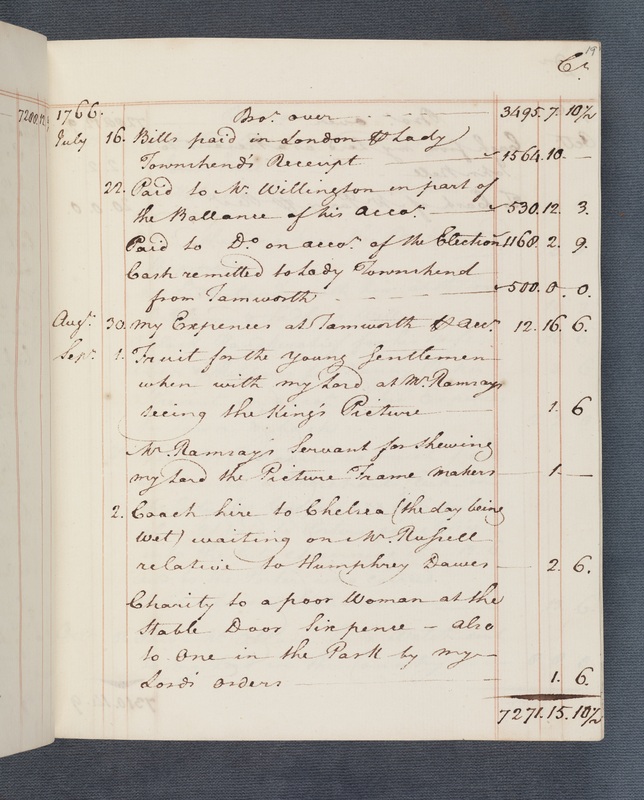 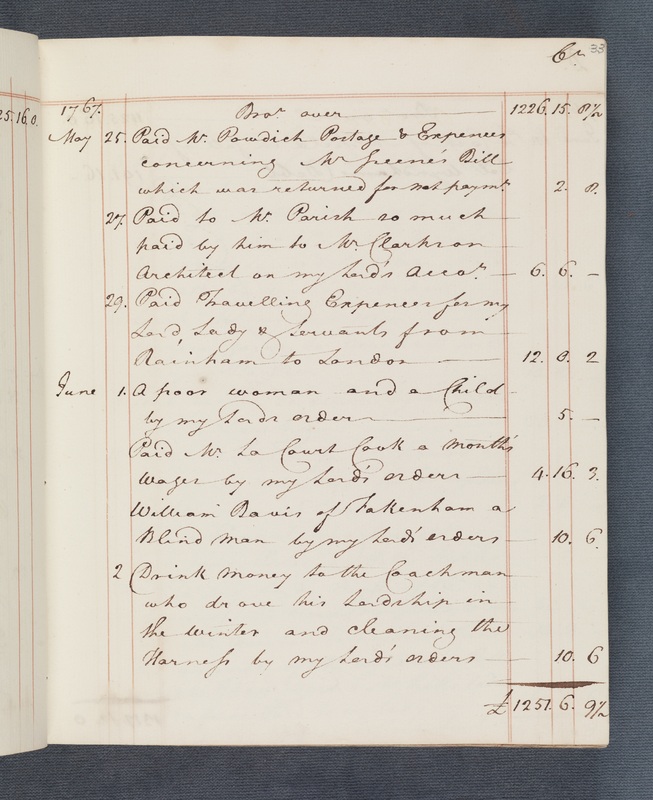 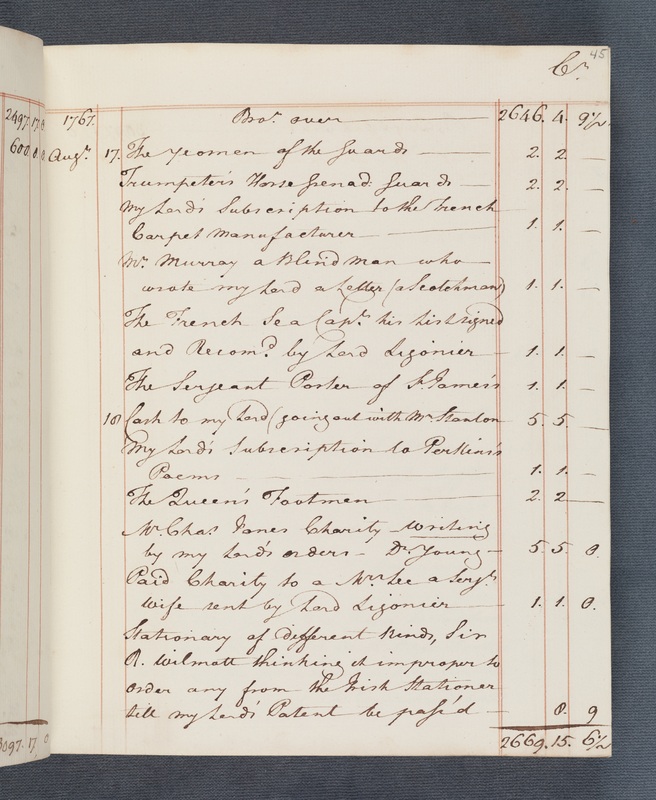 Lord Townshend (1724–1807) was a Norfolk neighbor of the Walpoles. This page in the account book from Townshend’s estate at Raynham Hall, kept by Sir John Lees, shows payments made in 1767 of between 1s and £5 5s for charity to military veterans, charity school children, petitioners, and local itinerants around the estate. There are various references to Townshend’s elderly comrade-at-arms Lord Ligonier (1680–1770), a French Huguenot refugee and military commander.

Sir Thomas Durrant (1722–1790) lived at Scottow Hall, Norfolk. This estate ledger from 1771 shows a sizeable donation of £25 to the new Norwich Hospital established the same year by the distinguished local surgeon Benjamin Gooch (ca. 1707–1776). Norwich Hospital was a successful example of an eighteenth-century philanthropic organization funded by public subscription, a common method of raising donations similar in principle to the joint-stock company. The hospital still operates today (on a new site) as the Norfolk and Norwich University Hospital.